For the fourth consecutive year, a Young Female Leader of the Year will be appointed, which will eventually lead to more women being found in leading positions. Jönköping University supports the project and our president, Agneta Marell, is in the jury. 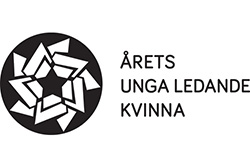 Jönköping County is among the worst in the country when it comes to the proportion of women in managerial positions. Only 28 percent of these are women, and the proportion of women in corporate boards is even worse - 17 percent. The project Young Female Leader of the Year, led by the Equestrian Alliance in Jönköping, aims to increase gender equality among the county leaders by highlighting good role models that can inspire others to become the leaders of the future.

During the three previous years as the Young Female Leader of the Year, a total of 78 women under the age of 35 have been elected to the list of nominees, a list that now will grow with about 25 new names. Last year, Filicia Björkman, Head of Unit in Elderly Care in Jönköping Municipality, was appointed winner.

Now it's time to announce the award again.
"As long as the numbers do not change, the initiative is needed," sais Ida Rydh, project manager for the Young Female Leader of the Year in a press release. "We also see that we have received an increasing number of nominees for each year with very good CV´s. We also see that more organizations support the initiative."

One of these organizations is Jönköping University, which supports the project, among other things, by our president Agneta Marell being part of the jury together with representatives from several of the other project partners.

Behind the initiative the Young Female Leader of the Year stands the Equestrian Alliance in Jönköping, an association of riding clubs engaged in youth activities in the municipality of Jönköping. The reason why the riding clubs are behind the prize is that the equestrian environment has proven to be skilled in educating girls to be future leaders.

The initiative is implemented through support from a number of organizations and companies, where Jönköping University is present. The surplus from the initiative will be used to develop young leaders through activities undertaken by the project organization and the riding clubs.

At the aretsungaledandekvinna.se, the public can nominate

External link, opens in new window. women under the age of 35 who live in the county, during the period 3 October to 18 November. Thereafter, the selection process begins and in February 2019 a list of leaders will be published. One of these wins the highest price; an inspiration trip and an training membership card for one year at Friskis och Svettis. The StyrelseAkademien organisation will also award a special prize, board member training , to the person on the list that shows the greatest potential to contribute and increase the proportion of women in the county boards.

Read more about Young Female Leader of the Year