Since 2015, Jönköping University is an Elite sports-friendly university. This means that elite athletes and women get more flexibility when it comes to lectures, study pace and exams. JU has 19 students who are in the program.

In 2014, Jönköping University (JU) was contacted by the Swedish National Sports Association (RF), who wondered how JU works with sports and elite sports, but above all, how do we want to do it in the future. Can the JU possibly be an Elite Sports-friendly institution (EVL)? Mona Sörman, who is a study counselor at university services, was commissioned to review how JU worked with its sports associations and the opportunities to receive elite athletes and give them a more flexible study path.

2015, JU was certified by RF as an Elite sports-friendly institution and this means that we are more attractive to elite sports students. The reason why elite sports students want to study at an EVL is that they get the opportunity for two careers. The students receive a more individualized study course where they can continue their elite effort and at the same time get a college education.

- Usually, this is about giving these students more time, as they often read at half-speed. It may also be that they have a competition or are on training camps during an examination opportunity, then they may have the opportunity to do the exam at a later time. They simply have a greater flexibility in terms of lectures, study pace and exams. says Mona.

However, there are tough requirements for the students who want to take part of this. It is required that they are, by the special sports federations' defined, potential or current national team athletes. In the field of students that plays in a ballsport, the requirement is that they play in the national highest series. This year, JU has no less than 19 students who are "EVLs". They compete in weightlifting, orientation, bandy, taekwondo, floorball, ice hockey, golf, miniature golf and rowing. One of the rowers is Filip Nilsson. He is 23 years old, reads Building Technology at School of Engineering at JU. He reads the last year of the program, which for the other students means the third year, but for Filip is the fourth year.
- The reason I chose to study in Jönköping and JU is the rowing. Had JU not been an EVL I would not have chosen to study here, says Filip Nilsson. As the rowing is a summer sport, Filip, together with Mona, has arranged so he reads more intensely in the late autumn and winter. Filip has a total of 11 national gold in rowing and being able to train with Jönköping Roddsällskap, with the proximity to Munksjön and to have the opportunity to combine it with the studies, he sees as luxurious. - You do not become rich on the row, so being able to secure with a higher education at the same time is important for me. We will soon go to Italy with the national team at a training camp, it would probably have been difficult if it were not for EVL, he says.

The European University Sports Association organizes European universities championship each year in various sports. This year, September 4-7, the European universities championship in rowing will be held in Jönköping and of course, JURA, JU's rowing association, will participate. Filip Nilsson will of course participate, something he looks forward to. He has not really decided whether it will only be in the single row, or if he should also start in the double. If he starts in the double, he will compete with with Eskil Borgh, also a student at JU. - It is difficult to have a clear goal, it is partly due to the opponents. Many universities around Europe have good rowers. but that in one of the classes should be in the final, I think this is a reasonable goal, says Filip Nilsson. Read more about elite sports and EVL here.
Read more about European universities championship in rowing in Jönköping here. 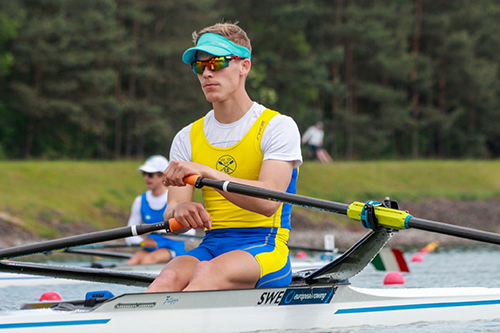 Filip Nilsson, one of 19 students in the program Elite Sports-friendly university.