Luisa Jödicke wanted to get as much as possible from her Näringslivs förlagd kurs so she chose to have it in the summer and extend it to 14 weeks. She is very pleased with her time at BMW and their production simulation department. 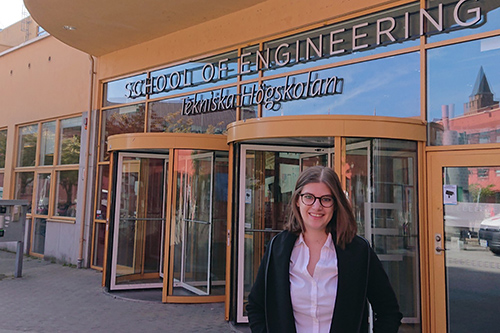 The school of engineering at Jönköping University gives its students the opportunity for a Näringslivsförlagd kurs (NFK). This means that the student has an internship, often between five and seven weeks, at an employer. The student also has the opportunity to place his NFK during the summer break, something that Luisa Jödicke chose to do. Luisa is from Germany and one of JU's many international students. She is studying her Master in Product Development at the The School of engineering. Luisa chose to place her NFK at the BWM Group in Munich, Germany. Two of her classmates also did their internship in Germany. They were at Porsche and Mercedes, both in Stuttgart

- I wanted to make my NFK in Germany and that it was at BMW was because I have a friend who works there. He helped me get a good contact on BMW and with a network, says Luisa.

You learn a lot at the school from their teachers, classmates and lectures, but getting an internship already during the education provides a clear connection between theory and practice. The fact that the students come out to companies during their education clearly benefits the students who get good experience, larger networks and one foot into the company. But it also benefits the companies so they get brand new input, new knowledge and the opportunity to tie up talent and skills.

- Before I thought about where to do my NFK, I had decided that I wanted to be with the company for more than five weeks. From previous experiences, I know that it takes a while to get used to and get into a new environment and a new job culture. Because I really wanted to get as much as possible from my NFK, I therefore chose to extend my internship over the summer break, so I was with BMW for 14 weeks, says Luisa.

Another important factor for Luisa when choosing a company was that she wanted to work with an area that the studies had not fully covered. So it was BMW and their production simulation department.

BMW is one of the world's largest car manufacturers. They have 30 production sites in 14 countries. Their production simulation department is both big and important to them. There, everything is tested by simulations in the computer. They simulate, among other things, how to improve current products in the cars, but also completely new ones. The department also analyzes energy efficiency, an important factor for car manufacturers.

At BMW and their production simulation department, Luisa worked in four areas. The main task was to work with their process simulation. The second was to analyze the processes, improve the visualization and connect standard processes between different departments. The third area was general translation work. She simply translated German texts into English. The last area Luisa worked with can be summarized with "other tasks" that could be smaller tasks that lasted for a day or two.

- I have learned very much practical things, but also about the work culture and work environment during my internship. Some of the tasks I got could seem rather boring at first, but it turned out that this was the tasks I learned most from and I have gained a great deal of insight about the company's structures and ways of working. I think NFK is a great course to have in the education. However, I would recommend other students to place it in the summer so that they get longer time at the company, as it takes time to get into everything, concludes Luisa Jödicke.