How Jönköping University was created

"We took a cheeky gamble" 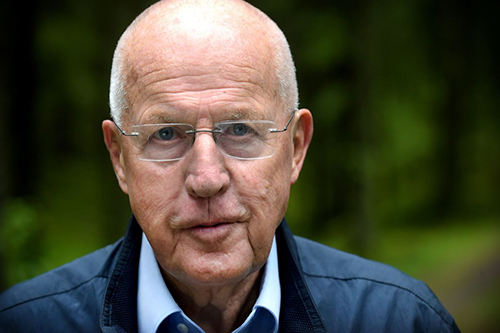 In 1980, Gösta Gunnarsson became the county governor for the Jönköping region. Until then, he had had a political career in the Centre party, with positions such as administrative director in the parliamentary party and under-secretary of state in the Prime Minister’s Office. During his 17 years as county governor, he played an important role in the founding of Jönköping International Business School and the transformation to a foundation university.

Why did you take part in the development of the university?

We worked hard to develop the region and saw the need for more research and university education. At the time, Jönköping was placed in the same region as Linköping, and a majority of the regional support from the state ended up at Linköping university. Jönköping was often overlooked, and I decided that something had to be done.

You were the first chairman of the foundation that shaped the concept for a new university. Describe the work that followed.

The analysis made by Åke E Andersson showed that the city needed a business school with a clear qualitative and international profile. I decided that we should carry this through, but there were a lot of people who were sceptical and wondered how everything would be financed. In 1990, the intensive work to get support and funding from the industry began. In the end, both industry, the municipality and the county council joined the journey. The foundation was founded the same year and we took a cheeky gamble. Within three years, the Swedish parliament made the decision for a business school in Jönköping.

The decision about the business school and the transformation to a foundation university was made in 1993. How did that feel?

It was a day of happiness, but there were no extravagant celebrations. As an inhabitant of Småland, you are always a bit cautious. But to me, it was very positive that everyone involved had such a great commitment and that we had stuck to the plan for a high-quality school.

Do you have any favourite memories from this process?

The year before the Swedish parliament’s decision, five professors from other universities showed up to talk to me and the project leader Charlie Karlsson. They applied to become professors in Jönköping. It turned out later that these professors had initially met to discuss if it was possible to stop the business school. When they understood the concept, they changed their minds and became interested in working with us.

What impact has the transformation to a foundation university had on the university and the region?

All the qualified individuals who have arrived in Jönköping have been of great significance for the society and the industry. Students have started companies, the university has inaugurated professors and been rewarded with prizes and honours, which have been a boost for the city. It is now natural for the small enterprises in the region to be in touch with the university and to benefit from that. That was not the case in former times.

What's your view on the development of the university?

There have been a few turbulent periods, but the university has always developed. I think it is extremely important to continue to focus on quality. You must maintain excellence, even if you want to expand.