Per Risberg actively participated in the planning work behind Jönköping International Business School and as chairman of the interim board of the Jönköping University Foundation he led the institution’s transformation into a foundation university. 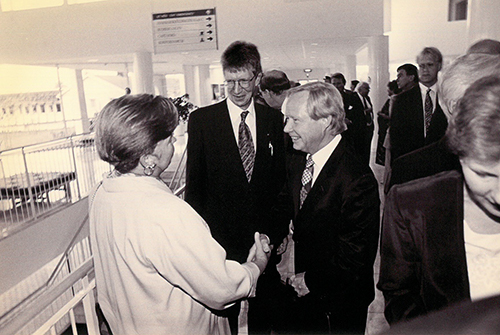 From right, Christina Hamrin, Clas Wahlbin and Per Risberg at the inauguration of the university foundation in 1994.

Starting in 1983, Per Risberg built Saab Combitech, a group of small and medium-sized companies with cutting-edge know-how, which – through cooperation – carried out development work and obtained business that was not possible for an individual company.

In 2006, Per Risberg was awarded Jönköping University’s Badge for Merit for, among other things, “with enthusiasm and entrepreneurial spirit having gathered local, regional and national forces in the public sector and business to support the creation of the Jönköping University Foundation.”

In 2008, Per Risberg was named Honorary Doctor at Jönköping University for decisive efforts for the university’s development over a long period of time and for innovative efforts in the Swedish high-tech industry.

The Per Risberg's Memorial Fund was established in 2019 and the Memorial Fund annually awards a scholarship to a person employed at Jönköping University who “has made a significant effort to strengthen collaboration and internationalization between JU and its stakeholders (business, public organizations).”