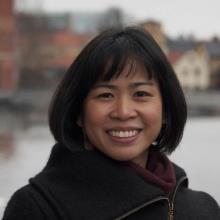 Joy Torgé holds a Ph.D. in Ageing and Later Life (2014) and is currently working as a Senior lecturer (US: Assistant Professor) in Gerontology at IFG, the Institute of Gerontology. Her disciplinary background is in Philosophy and she holds two master's degrees in the subjects Applied Ethics (2006) and Health and Society (2008). Joy is a member of the research group ARN-J (Aging Research Network - Jönköping) at Jönköping University.

2014: Joy's Ph.D. thesis ”Ageing and caring as couples with disabilities” was based on qualitative interviews with older couples with physical disabilities on their experiences of informal and mutual caring.

2016: Principal investigator (PI) for the FORTE-funded project ”Family life and informal care within eldercare: Couples with unequal care needs in assisted living”. The aim of this project is to add knowledge about family life and care at the intersection of private and the public spheres, particularly when couples with unequal health needs move to an assisted living residence together. This project ended in 2019.

2020: Co-applicant and Co-PI for the FORTE-funded project on applied welfare research, "Closing the gap between the ambitions of carer support and its uptake – Investigating perspectives of and conditions for different welfare professionals and carers". This is an interdisciplinary project and builds on existing data from a national survey on carers, a web survey for municipalities, and interviews with caregivers, needs assessors and family care consultants.

Involvement in other projects:

2016-2019: Joy was a researcher in another FORTE-financed project about older people with severe mental illness. In one substudy, she has studied the kinds of support given to older people by volunteer organizations focusing on mental health and illness. Another substudy she is working on deals with experiences of old age care staff in working with people with severe mental illness.

2018-2020: Researcher in a collaborative project between the School and Health and Welfare, the Swedish Transport Agency and the Fire and Rescue Services in Jönköping municipality. This project is about emergency services' suicide prevention work. The project was financed by the Public Health Agency of Sweden, where the results are also published as a report.

Joy is the Editorial Assistant and Book Review Editor for International Journal of Ageing and Later Life (IJAL), a scientific open-access journal on social gerontology. She is also a board member and the secretary of SGS, the Swedish Gerontological Society.