Becoming a woman entrepreneur in the Arab Gulf States

How do women entrepreneurs in the Gulf States establish themselves and grow their businesses in a male-dominated society? In her doctoral thesis, Dr Sumaya Hashim explores entrepreneurship from the context of the Arab Gulf States and women’s lived experiences of being entrepreneurs there.

Sumaya Hashim was born in Bahrain but moved to Sweden as a child for a period of eleven years. Coming to Sweden, she experienced something of a culture shock. The experience raised many questions, especially during her teens, about the middle east, the role of women and ultimately her own identity as someone with a foot in each culture. 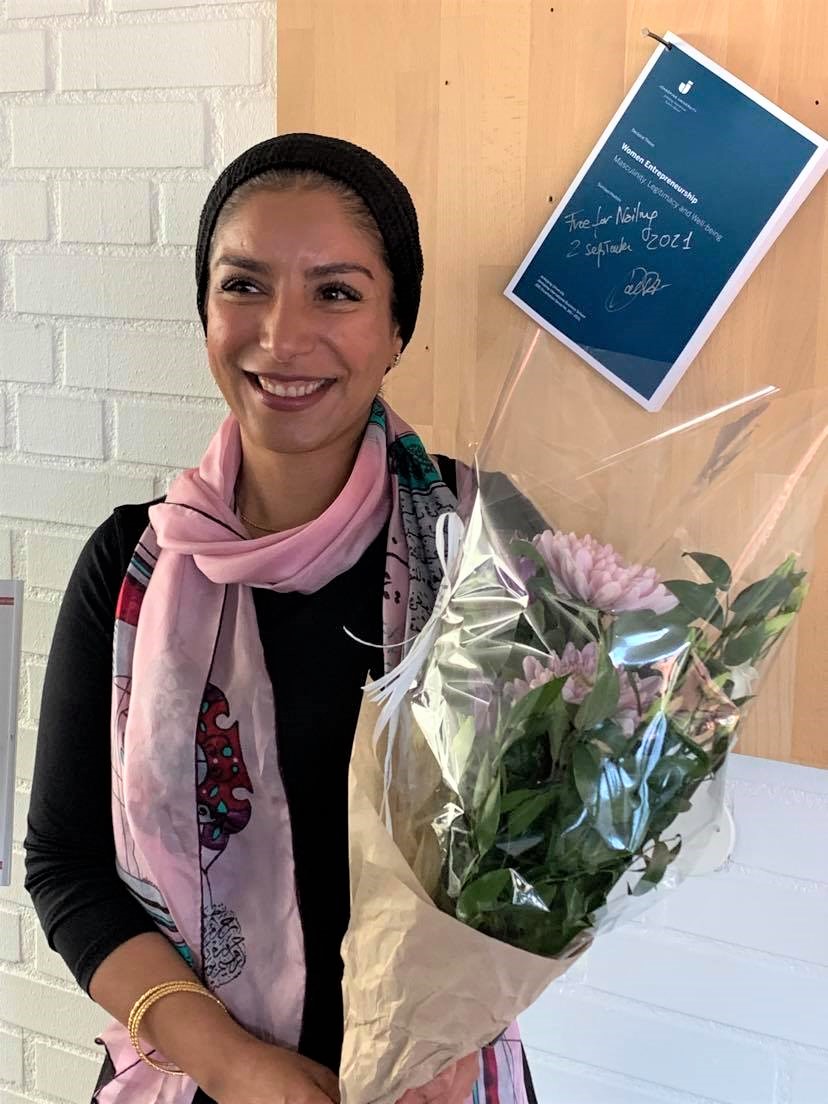 Sumaya Hashim moved from Bahrain to Sweden in 2016 to do a PhD at Jönköping International Business School. She successfully defended her thesis on women entrepreneurship on September 23 2021.

Having moved back to Bahrain after high school, she returned to Sweden in 2016 to start a PhD at Jönköping International Business School. It was then that she felt able to return to these questions and explore them through the subject of entrepreneurship.

“My research has been a means for me to take up the questions that fascinated me as a teenager,” she explains. “It’s also a way for me to give something back to society by contributing to better understanding of what it’s actually like to be a woman and a business owner in the Gulf States.”

Modernity and tradition in the Gulf States

The Gulf States have gone through a period of massive change. The wealth generated from the oil discovery in these states has resulted in a modernized infrastructure, high literacy rates (especially among women) and a good healthcare system. Efforts to move away from a publicly owned, oil-dependent economy means that the government has been investing in and encouraging private enterprises. So, it’s a good time to be an entrepreneur in Bahrain.

"...due to the clearly defined roles that men and women have within the family, women can face certain opposition when they raise the idea of starting up their own business."

But amid these new trends and economic developments, the one institution that hasn’t developed or changed in step with society is the family. Men and women, encouraged within the public sphere to get a good education and to aspire to a well-paid job, are, however, still expected to adhere to traditional gender roles within the private sphere of the family.

“A man is the head of the family, the decision-maker and accountable to God when it comes to providing financial support to family members. There is nothing preventing a woman from working; however, she is not obliged by religion, culture, or law to provide for the family. Men are raised to be masculine, and women are raised to be feminine. In many ways, women benefit from the incredible support the family provides. However, due to the clearly defined roles that men and women have within the family, women can face certain opposition when they raise the idea of starting up their own business. This especially, since the social contract that was formed during the oil era encouraged men and women to seek employment in public institutions or large and well-established firms in the private sector.” explains Sumaya Hashim. 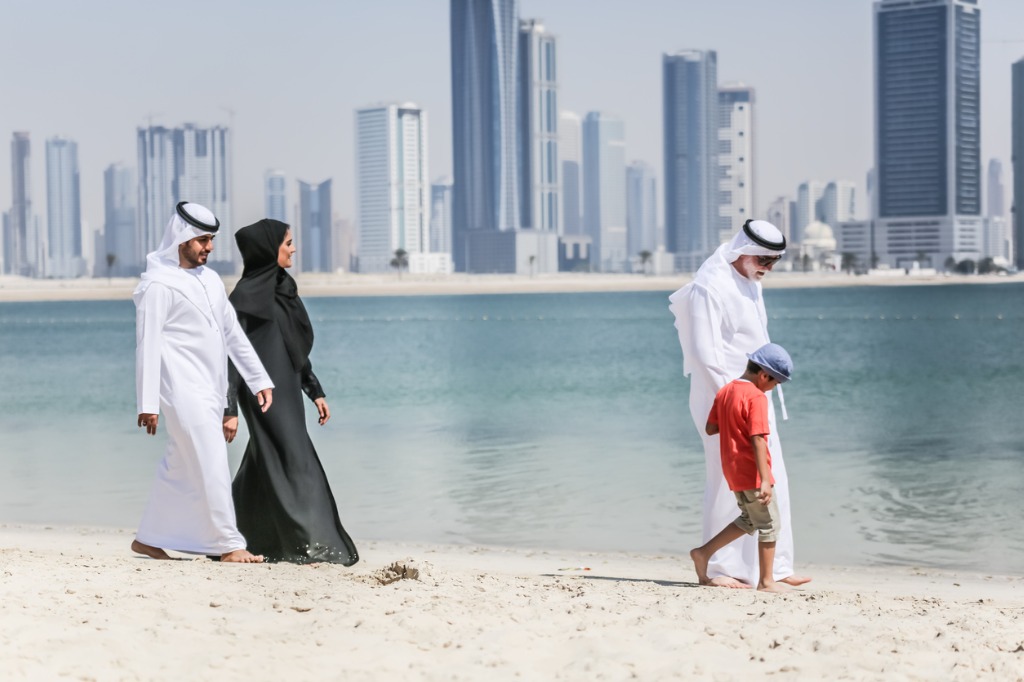 The family plays an important role in Arab society of the Gulf States. In the private sphere of the family, men and women are expected to adhere to clear gender roles. (image: iStock)

In a male-dominated society like Bahrain, the way women entrepreneurs interact with men is key. Research that has been done on women’s entrepreneurship has often approached it using Anglo-Saxon theories on masculinity. In the west, bias dictates that an entrepreneur is a middle-class white male, and to make it as a female business owner, women have often had to ‘act like a man’. But according to Sumaya Hashim, since the social arrangement is different in the Gulf States, if we want to know more about women entrepreneurs there, we need to explore masculinity enacted by men in this context too.

“In carrying out my research, I saw that within the context of Bahrain, one of the Gulf States, there are four main forms of masculinity enacted by men that either restrained, encouraged, drained resources from or amplified women’s entrepreneurial activities (see fact box). Women entrepreneurs had to deal with these different forms of masculinity enacted by men either by complying with those that restrained them, or by collaborating and combining resources with those that encouraged them, or by fighting back against those that were more destructive and exploitative. How they handled different forms of masculinity influences impacted their entrepreneurial activities.”

And what about those women who managed to start up their own business with no man in the picture? Sumaya looked at 24 case studies of Bahraini women who had gone through a divorce. This can not only be a long and stressful process in the Gulf States but can be challenging due to the social stigma of divorce.

“Divorce is not a private process between two people – the family can get involved. They can sometimes give the women the support they need but at other times the family can become another obstacle to getting a divorce. Since men are recognized as the main breadwinner, this provides the man with more leverage to secure custody of children during court battles. Surprisingly, women also experienced stigma from other women” explains Sumaya Hashim.

Sumaya Hashim and her co-authors observed that all women in their study that had been through a divorce experienced a phase of loss of meaning in their lives. However, the interesting part is how these women were able gain and re-establish new sources of meaning. Of the case studies she looked at, 20 women started up their own business after their divorce. Entrepreneurship was one of different activities they engaged in that led to self-discovery, self-realization, and self-acceptance.

“These women had felt trapped in their marriage, they had gone through a terrible divorce process, and were left at their lowest ebb. Starting up their own business was a way of putting some meaning back into their lives. Once back on their feet, with a successful business, many of them also had a strong desire to help other women.” 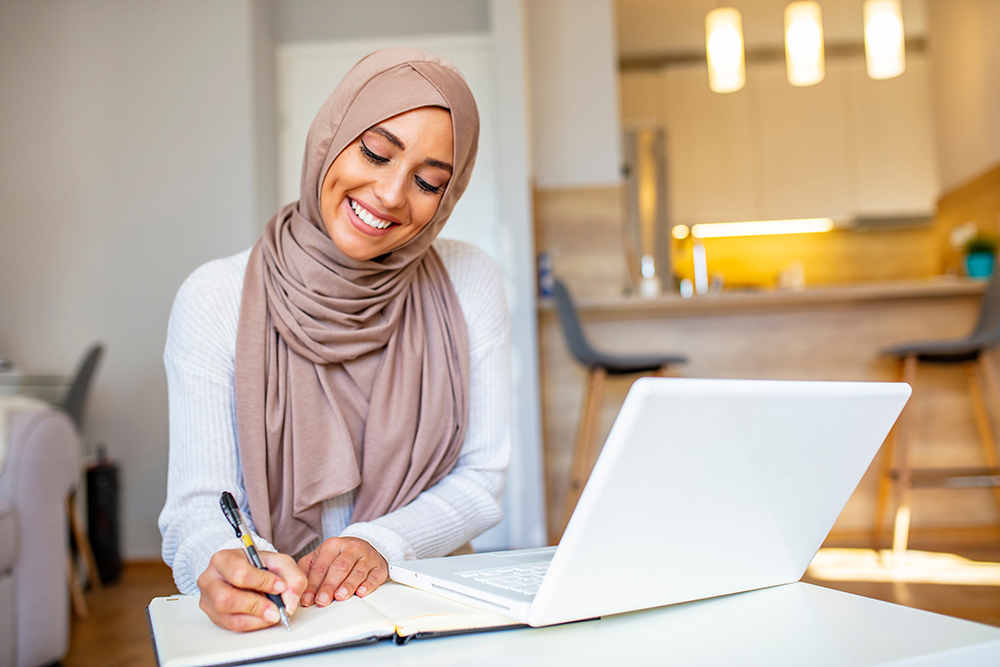 In her research, Sumaya Hashim found that entrepreneurship was one of the activities that helped Bahraini women recover and feel empowered again after a divorce.

So how do women entrepreneurs in the Gulf States reach the point where their business ventures are respected and taken seriously? In Sumaya Hashim’s research she shows that legitimacy is a process, with different stages that women go through.

First, a woman will gain a personal sense that their idea is a good one and worth pursuing, this is helped along by validation from family members or external persons. Second, she’ll get commercial validity referred to as ‘market validity’ – this is done not only through formal registration of the business, but also from the positive reactions from customers, or important external actors who acknowledge and champion her business. She might get awarded contracts, join associations, and be invited to join networks as a result.

A third, and important legitimizing phase is when a woman entrepreneur receives recognition from a member of the Bahraini royal family for her entrepreneurial activity. Royal awards, such as the Bahrain Entrepreneurship Award or the Crown Prince Award, are a very significant form of validation and can propel not only the woman’s business, but her social status.

“Interestingly, getting a royal award can also change a woman’s role within the family. She is then seen as an equal to the man who is in the role of the head of the family, and will be as respected as him,” says Sumaya Hashim.

Since the 1950s, the Gulf States have made huge reforms. They’ve taken giant steps towards diversifying their economy and improving and expanding public services such as education and healthcare. The region is, to a large extent, stable and forward-thinking. But Sumaya Hashim argues that in certain areas they haven’t come far enough and new reforms are badly needed.

“How should the role of the family work in this new system? How can we address the more negative kinds of masculinity that women face? How can we reform the divorce process so that women don’t come out of it having lost everything, including their well-being? Economic reforms aren’t enough to improve things for women entrepreneurs in the Gulf States. To achieve real economic empowerment, we need to make more changes on a societal level.”

“This idea of what it means to be a woman entrepreneur and how it defines them as an individual is something I believe we can investigate further, not just in the Gulf States, but here in Sweden too. It’s a topic I’m passionate about and intend to keep researching on,” says Sumaya Hashim.

See Sumaya Hashim interviewed about her research on women entrepreneurs in the Gulf States on 'Förklarar din Forskning" (Axess TV, 2021)