At the World Foundry Organisation’s congress in May, professor Attila Diószegi from Jönköping University received the Best technical paper award. In the paper, new knowledge about the casting process was presented, which may result in improved quality and thereby decreased costs. 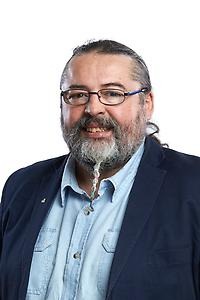 Attila Diószegi is a Professor in foundry technology at the department Materials and Manufacturing at the School of Engineering, Jönköping University. Together with two other researchers, Jessica Elfsberg from Scania CV AB and Zoltán Diószegi from Volvo Group Trucks Operation, he has carried out the research behind the paper.

“We have investigated how the emergence of porous areas in the cast material is influenced by how the forms are filled with the molten material”, Attila Diószegi says. “In the project we have studied casting of complex components, such as engine blocks and cylinder heads.”

Porosity in the final cast components is a common problem and causes costly quality deficiencies. It is known since earlier that the porosity in the material is caused by too high levels of hydrogen and nitrogen, and that the levels increase when the molten metal is poured into the moulds. However, there was limited knowledge of how the method for filling the moulds influences the gas levels.

“What we have found out is, among other things, that the bigger the open surfaces of the liquid iron are during mould filling, the more hydrogen and nitrogen is solved into the material. It is therefore important to minimize the turbulence of the melt when it is poured into the moulds.”, explains Attila Diószegi.

Traditionally, completely closed sand moulds are used for the kind of casting this research has focused on. To be able to study how the molten material behaves, Attila and his co-researchers have developed a new type of moulds with a transparent surface, which makes it possible to see the streaming melt.

“In our project, we have developed a mould partly consisting of glass. By filming the liquid iron with a high-speed camera when the mould is filled, we can measure the speed and turbulence of the streaming material”, Attila Diószegi says.

The awarded research is part of a long-standing and broad research cooperation between Jönköping University and the two Swedish companies Volvo Group Trucks Operation and Scania CV AB, both of which are leading within cast manufacturing. Within foundry technology, a continuous cooperation has been going on since 2004. This has now resulted in valuable results that can be applied in industry.

Attila Diószegis’ professorship has been appointed and financed by Jönköping University, the Knowledge Foundation, Volvo GTO and Scania CV AB.

The World Foundry Organisation (WFO) is a worldwide organisation for companies and researchers within foundry technology. The organisation has 29 member states, and Sweden is one of them. Every second year the WFO arranges a conference to present technological progress and research results. In connection with that the “Best technical paper award” is distributed.