he research group CCD (Communication, Culture, and Diversity) was formed at the then University of Örebro. 25 years have passed and the environment has developed all the time and is now stronger than ever.

The history of the research environment CCD began during the spring semester of 1997 at the former University College of Örebro. Sangeeta Bagga-Gupta, professor at the School of Education and Communication (HLK) at Jönköping University (JU), was active there and established the research group which was first called "Deaf and hard of hearing - Pedagogical perspectives". Soon after, the group’s designation changed to KKOM-DS (Communication, Culture and Diversity - Deaf Studies). The research group developed quickly into a "smaller but strong research environment". As the group had a strong international character, the name was changed again in 2010 to CCD (Communication, Culture, and Diversity). In 1999, Örebro University College became a full university and when the subject of pedagogy was created, the research group was expanded with several members that had strong interests within the group's research field. From having primarily operated nationally, CCD now took on an even stronger international presence. During this time, Sangeeta Bagga-Gupta was the environment's scientific leader and occasionally had other colleagues as operational leaders.

In 2010, the CCD consisted of a professor, an associate professor, a visiting professor, a university lecturer, an assistant lecturer and an assistant professor, as well as nine doctoral students (all financed from external funding). CCD was named in a first external review of all research activities at the university, as one of the strongest research groups within humanities and social sciences, giving CCD access to faculty funding for the first time.

In 2012, the group began a cross-sector collaboration with state support (the Cultural Council and the Ministry of Culture). The project DoT (Participation and Theater) was started the same year together with Länsteatern in Örebro, but ended in 2016 and was replaced by the think tank DoIT (Participation and Inclusion Think Tank).

In 2016/2017, CCD moved to HLK at Jönköping University. Collaboration with various new international actors was developed, including various institutions in India. 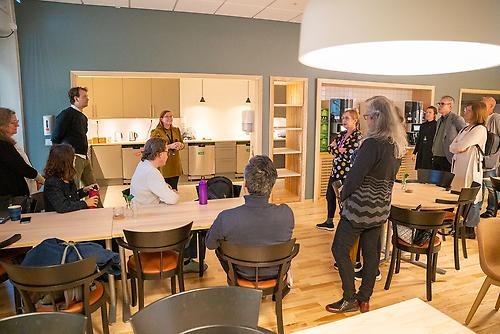 It was celebrated with cake at HLK when CCD turned 25 years.

“There are many important things I could highlight that the environment has done, but among other things it has raised awareness of the necessity for interdisciplinary approaches and, in this, it has succeeded with flying colours. We have drawn in nearly 100 million SEK in external funding for interdisciplinary research projects, for three of our own research schools and about 15 international conferences. We have also put previously unexplored areas on the map (especially deaf studies, studies of marginalized groups, literacy, multilingualism/speaking, “The Other", and decoloniality) within disciplines that are represented within CCD,” says Sangeeta Bagga-Gupta.

Sangeeta has throughout the years been involved in the environment, and in the last few years as a research group leader. Earlier this year, Maria Bäcke took over as group leader. Maria is a university lecturer in English at HLK and alsoprogram manager for the master's programme LeaDS (Learning, Digitalization, and Sustainability) Maria believes that it is important to think both internally and externally for CCD to remain relevant.

“I see it as important to work both externally and internally within JU. Externally, we will continue to work with various research and collaboration projects in communication, culture and diversity, both within and outside academia, to create the conditions for a sustainable society. Internally at HLK and JU, we work to tie research and undergraduate education closer together. The new master's program LeaDS, for which I am the program manager, has great potential to form a bridge between learning and social sustainability, which also has its roots in digital development,”she says.

The activities within CCD continue with their focus on research in learning and communication and since its placement at JU the group has welcomed additional members, both from within JU as well as researchers from other universities in Sweden and abroad.

Maria believes that CCD will continue to exist and be important in the future as well.

“As long as different types of minority perspectives and gray scales need to be highlighted, I think that CCD will continue to have a major task in terms of research,” she concludes.